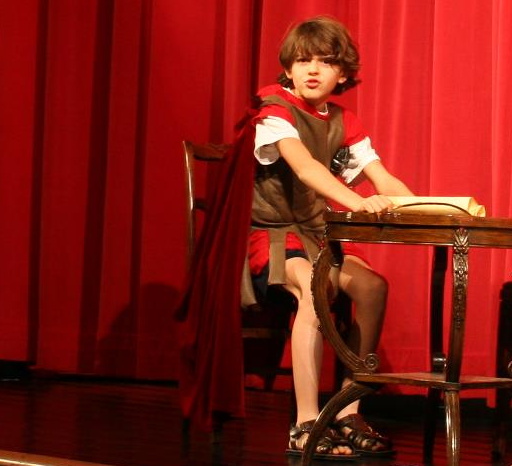 Vinny is 11 and lives nearby us here in New York.

On Mondays, he starts out with a high-powered math class with other children who are fortunate enough to be *educated outside the system*. The class is no joke either – an algebra/geometry acceleration program taught by perhaps the best math teacher in the universe, i.e. moi!

Mondays are also play rehearsal days. Vinny just starred in a 2+ hour play based on Shakespeare’s Julius Caesar. And I believe Antigone is next up for the spring show.

Tuesdays are quiet days, dedicated to seatwork at home.

Wednesdays he learns Spanish from a private tutor that he shares with two other kids. Then he meets with his piano instructor in the comfort of his home as well.

Wednesdays also featured science classes this fall at a local museum – again, also with numerous other children whose schooling is directed by their parents.

Thursdays he has a private voice lesson in the morning. And then he sings with a large boys choir in the afternoon. (Mixed with *school boys*.)

Friday mornings he travels a few towns over to participate in a chess club/league. And starting soon he’ll be ice skating with this group on Fridays right afterwards.

Saturdays Vinny does karate. In fact he squeezes in kicks and punches in the afternoons all week long, when he can.

Sundays are for church and family time.

For history, Vinny mostly reads – not by the book , but by the *library shelf* from what I understand. He also, just like my younger children, has used and enjoyed the Story of the World series

In addition to Spanish, Vinny is learning Latin.

And in addition to my math class, he’s doing Singapore Math workbooks and a whole lot of Khan Academy. In fact, of all the students I *coach* on Khan, he’s one of the most prolific users of that great website. In four months he’s blasted through *91 skills* already. Again, he’s only 11.

You see, Vinny is very SELF-MOTIVATED. I don’t believe his parents are behind him with an electrified cattle prod even in the slightest. He just loves to learn and it’s apparent in everything he does.

Take a look at his *activity* on Khan Academy for the past 30 days:

Allow me to explain. That chart says he’s spent 21 out of the last 30 days on Khan. Just to give you a point of reference, most of my students have probably been on this website, which I RECOMMEND to parents until I’m hoarse AND blue in the face, about 2-4 times, in the past month. And not only is he working through the material consistently, but he also spends much, much more time when he sits down at the computer.

And this is one of the stark differences I see firsthand between children who are in school and those who are not. The school children have very fleeting attention spans. They will log on to Khan, probably only after their parents scream their heads off, but they never stay on for more than 10 or 15 minutes. Obviously they can’t learn anything meaningful in such a short time, with so little effort.

One day, I saw that Vinny had spent north of 3 hours on Khan! And you can see from the chart, that his sessions are substantially longer than the 10 minutes I see from *system* kids.

How long is your child’s attention span?

How long do you think it should be?

And what steps can you take to lengthen it?

This is a very serious matter. A parent wrote me recently and said that one of his major goals was for his children, “…to be able to focus on difficult tasks for up to four hours at a time by the time they are 14.”

Okay. My accelerated math classes are either 1.5 or 2 hours long. And let me tell you….many of the younger kids start squirming only 20-30 minutes in – and they beg for a *5 minute break* which I used to grant them. But I don’t anymore.

Children do indeed have to build up their intellectual stamina. After all, their parents in the REAL WORLD have to concentrate on singular tasks at work for often longer than 10 hours!

Alright I’m going to end this post here as it’s long enough. We’ll check in on Vinny sometime in the future.

The purpose of this post was to illustrate just how easy it is to construct an impressive, individualized curriculum. Since I’m forever being asked *how do you teach your own?*, I’m forever trying to find ways to better convey what it is us renegades do everyday. Lately I’ve been directing people to my YouTube channel…

Oh, I almost forgot. Listen up you Luddites…

Vinny has good access to computers at home, obviously.

The internet is the greatest educational boon in history. So I’d strongly suggest all parents figure out a way to eliminate the video game usage and other nonsense and get over their irrational fears that some weirdo is going to contact their children online….and get their kids on the computer as much as possible to capitalize on the bounty of the internet.