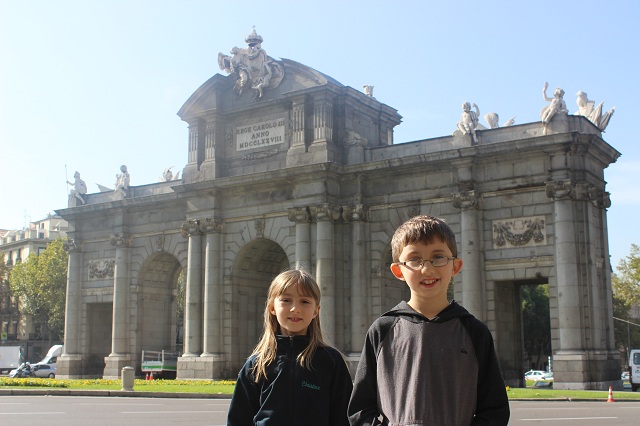 A couple of weeks ago, on the spur of the moment, I decided to take the kids to Madrid, Spain.

Inez was en route to New York for business, I’d heard good things about Madrid, I can understand and speak Spanish (un poquito), flights weren’t that expensive, our schedule was wide open,….and basically because we COULD!

This really is precisely why we do what we do.

Now that I’m a homeschooling veteran and thus a bit wiser, I’m fiercely protective of keeping days and weeks clear of obligations and commitments.

Well, we left on a Tuesday morning on Air Europa and, ironically, booked a room at the Hotel Europa right smack dab in the middle (El Centro) of Madrid. The main plaza there is called La Puerta del Sol.

This is not going to be a long blog post because I have another long one to write up on our trip this past weekend to Istanbul.

In Madrid we did our usual.

Early on our first morning we jumped on the Hop-On-Hop-Off city bus tour to get the lay of the land. There are actually 2 different routes so we bought a 2-day pass.

Everyone got off the bus at Real Madrid’s soccer (football) stadium but my kids surprisingly had no interest. As Christine said, “I only like to PLAY football, not watch it…”

We visited the Royal Palace which was beautiful – although I would say we’ve certainly had our fill of palaces this year! After all, many people we starving while these kings and queens were basking in luxury…

We paid a lot of money to see the best, “el mejor” flamenco show at – Corral da la Moreria. That show is listed on these *1,000 things you have to see before you die* lists and deserves to be. It was positively terrific and worth every Eurocent! No cameras were allowed but you can get a sense of it on YouTube.

The main food court/eatery is the Mercado de San Miguel. It was so great we went there at least 3 times.

It was 75 degrees (24 Celsius) each day, sunny with hardly a single cloud in the sky.

Overall I would say that Madrid is a wonderful city. The people are very friendly and I didn’t feel unsafe – as I have in Paris, Milan, and Istanbul – for even an instant.

The main square there at Puerta del Sol is really hopping with tourists and street performers all day and night long.

In fact on our final evening we enjoyed a clown/mime there who was “messing” with passersby. At first there were only a few of us watching but he was so funny that in no time there were 200 people cheering him on.

He actually dragged me, and then my son, into the show. (This happened in Edinburgh, Scotland too!)

Well, I did hand off my phone to Chrissy to record the performance but the footage didn’t come out so great.

You see Chrissy was laughing so hard….that she actually wet her pants!

I’m telling you, the guy was hilarious.

Definitely take a quick look at my PHOTO GALLERY.