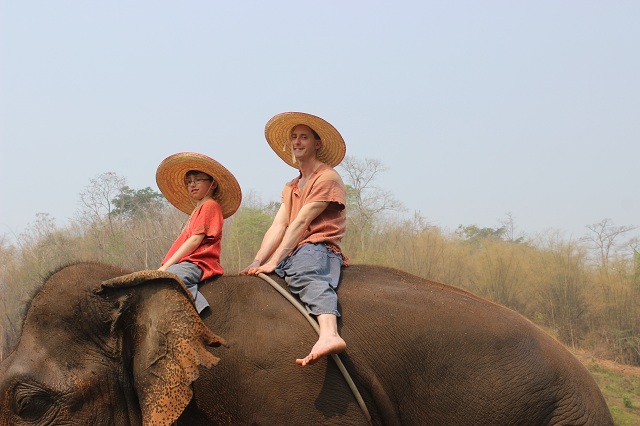 We left London, for good, at 9 am on Saturday April 4th.

See my post – Leaving London – if you haven’t already.

A massive cleaning crew descended on our flat as did our airport-bound taxi. I quickly ran to the South Ken Tube station one last time to get rebates on our Oysters (public transit debit cards). It was all a little chaotic, and sad. This was our HOME for nearly 15 months.

We were flying direct to Bangkok at noon – a nearly 12 hour flight! I was somewhat nervous about how the kids (and I) would do seeing how we were all wide awake. (We’d lose 6 hours on the time change too.)

Unfortunately we had the last row of on massive plane and my stomach just about sank when I realized that until I determined that the seats still reclined 6 whopping inches – same as everyone else. Could you imagine if they didn’t go back???!!!

It got dark fast as we flew East. Another potential disaster was that our overhead book lights were not working. However we eventually figured out a work-around. I was enjoying The Everything Store – an amazing book about the founder of Amazon.com.

It was kind of cool/scary to watch our flight path on the monitors over several “unstable” countries; and we whizzed right past (over?) Mount Everest too.

Overall the kids did great – although they didn’t sleep a wink. We then had a 2 hour layover in Bangkok before a 1.25 hour flight to Chiang Mai, the first of our scheduled three stops in Thailand.

If you are anxious, busy, lazy, illiterate, or alliterate….you can skip the post and just look at my 400 photo GALLERY.

Our whole 11-day trip was booked through a travel agent in London($7,500). I don’t know that we’ve ever used an agent before…

Anyways they included shuttling to and from all airports. I don’t know that it’d be necessary if we went again but it was nice for our first trip to this exotic land (do you speak Thai?) to have a driver waiting for us outside baggage claim, holding a placard with our name on it.

It was only about a 40 minute ride to our hotel – the DusitD2 – HOWEVER our rooms weren’t ready, being morning still, and we had a torturous wait in the lobby for them. My “overtired” kids were off-the-wall and I would have murdered them if it weren’t for the threat of ending up in a notorious Bangkok prison or something!

Ultimately we got slightly upgraded and into our adjoining rooms….then we all promptly crashed for a 3 hour nap even though it was like 11 am local time.

We had a guided city/temple tour booked for that afternoon – again included with our travel package. I always like to do tours right away in new cities.

Now I did have to somehow get some Thai baht (currency) too and was pretty afraid to walk out on the streets looking for an ATM. I mean the entire city, to a new visitor, looks scary poor and thus pretty dangerous. It turns out most of Thailand is extremely safe but, trust me, upon first glance you’d be scared to walk down the street with your passport, laptop, tablets, and a few thousand dollars in your backpack as I was. I certainly wasn’t going to send my wife out to get money!

There was a currency conversion booth not far away which, in the absence of any banks, I had to investigate. I was very suspicious of using it – having been roped to the tune of 17% the first time I exchanged dollars for pounds.

Well the advertised spread on for converting dollars to pounds was so narrow as to be incredible. I asked if there was a commission and the woman said “no commission”. So I converted $200 into 6,400 baht and walked away in disbelief that currency could be exchanged at a cost of basically .5%. That’s right only one-half of one percent!

Did I mention the 96 degree weather? After over a year in London….it felt great!

Not far from the hotel our guide took us to our first temple stop: 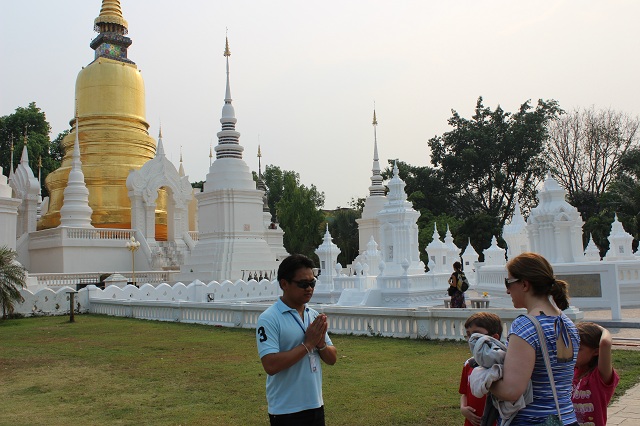 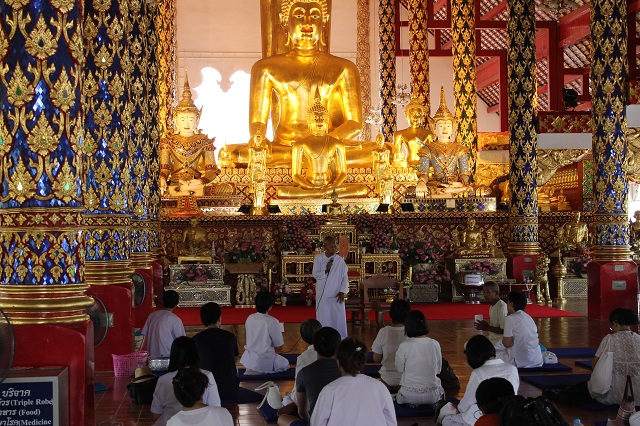 There we also saw a hilarious spectacle – a pack of young Buddhist monks who were whipping rocks at each other and generally misbehaving. I have a little clip of them you will see in a video down below. Apparently the kids live at the temple. They are sent there by their parents and I suspect it’s sort of like sending American brats to military school, i.e. for much needed discipline!

We snagged a $3 dollar lunch (total, for Inez and I) that was amazing and only a harbinger of great culinary delights to come: 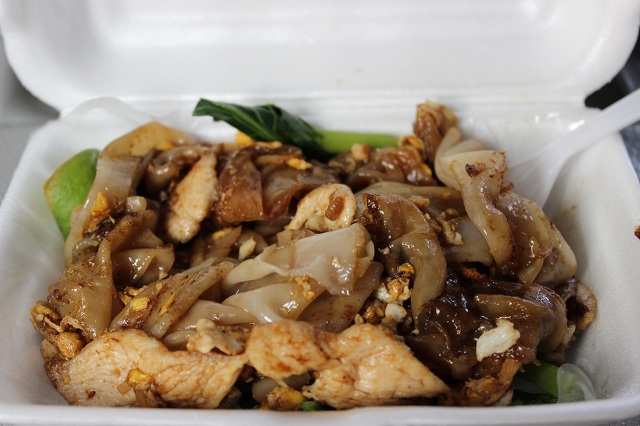 Then hit another temple: 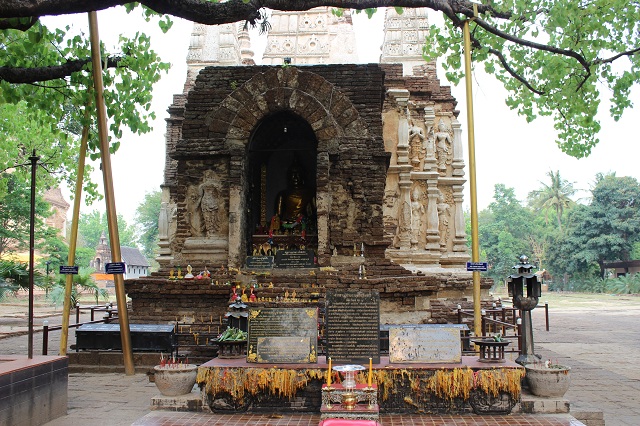 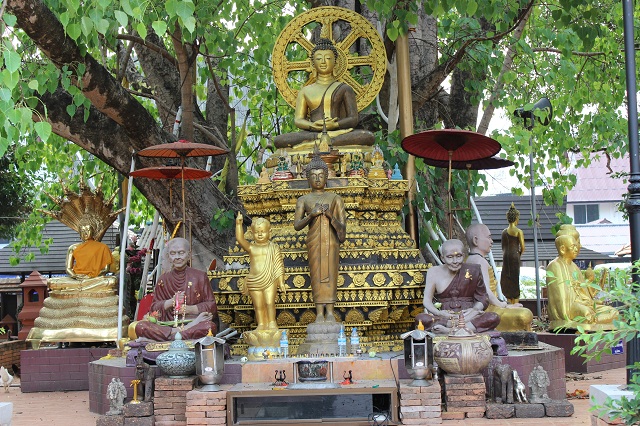 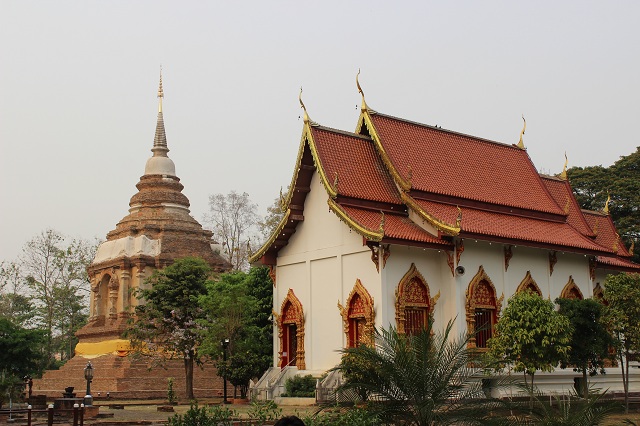 Then it was an hour drive to the big temple, perched high above the city: 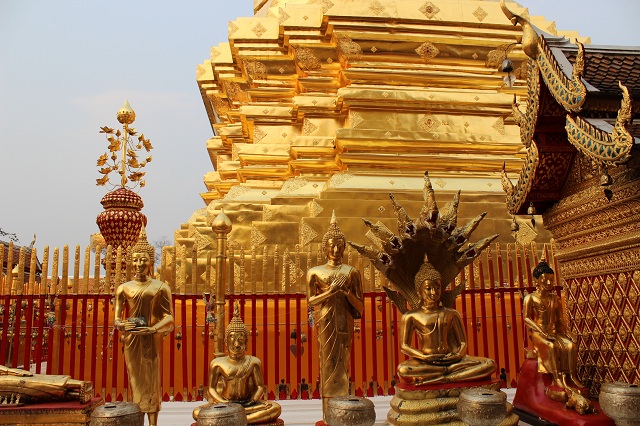 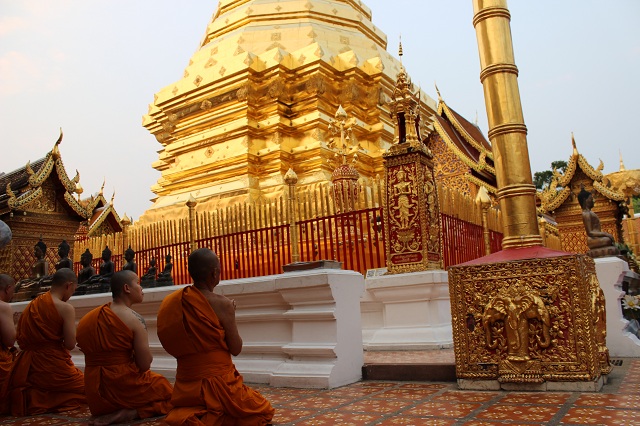 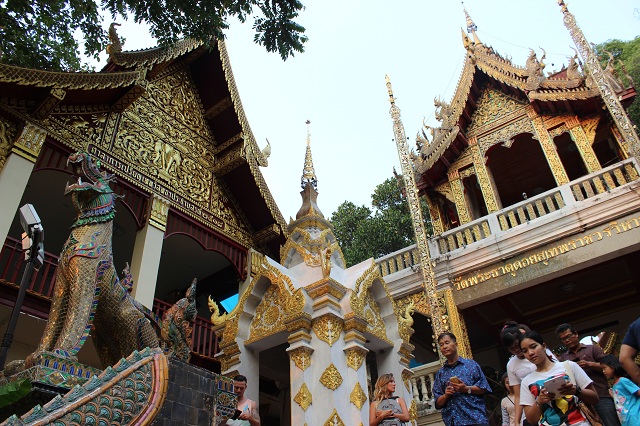 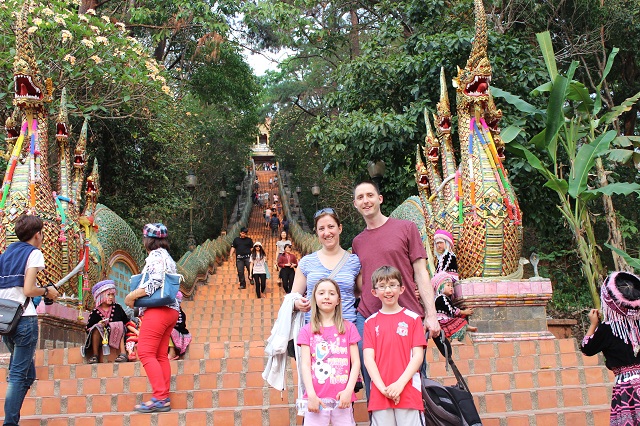 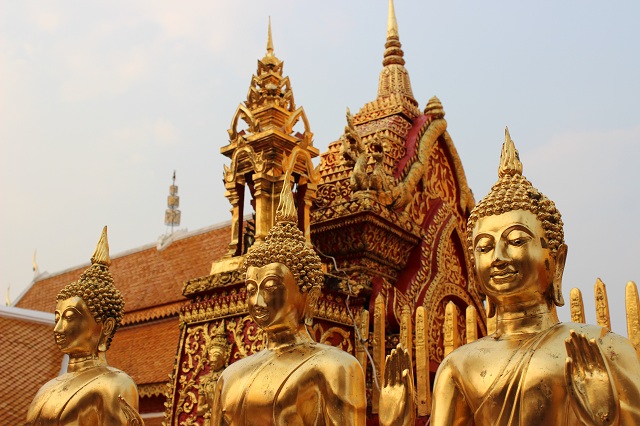 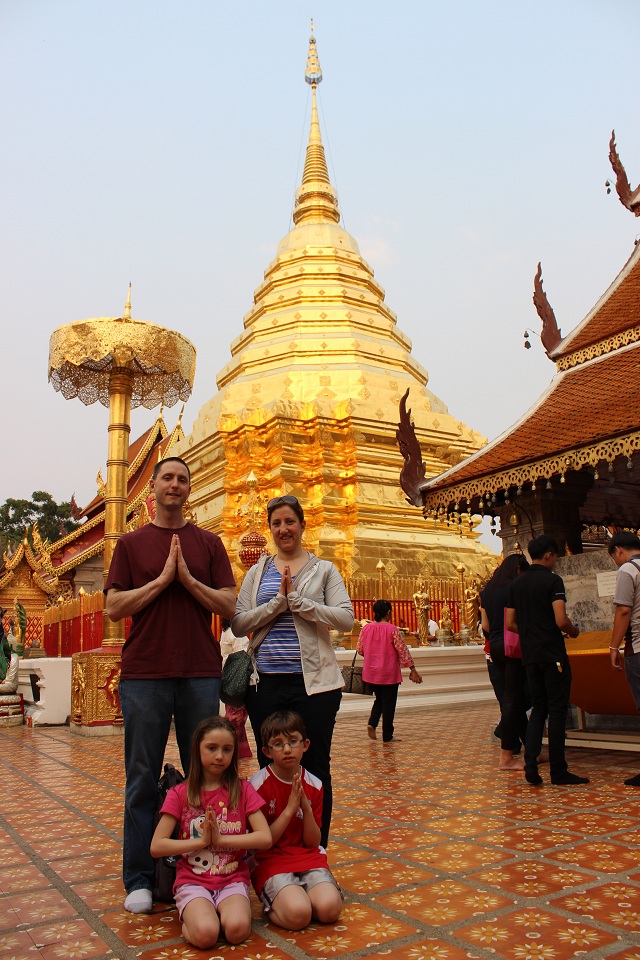 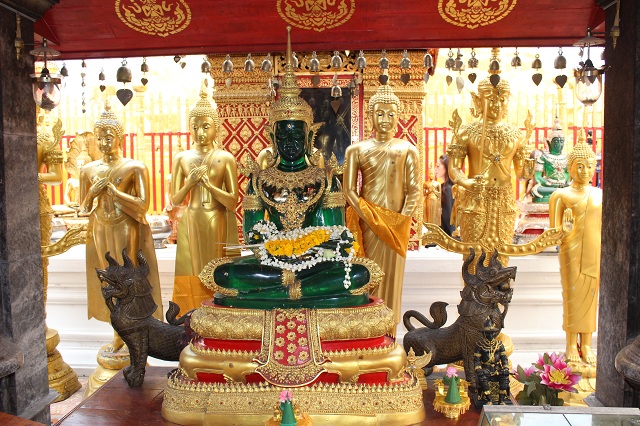 The temples were impressive to look at but after a few hours I had my fill of Buddhist history. Our tour guide kept going on and on…

We did catch, sort of, the sunset at this last stop but it was pretty hazy out and not exactly scenic. We’d see many better ones on this trip.

You might have seen us wearing long pants even though it was pushing 100 degrees….we had to cover up somewhat in those temples as a matter of protocol.

For dinner we fed the kids scraps (oatmeal, chips, soup) in the hotel room while I ventured out to the Night Bazaar looking for some takeout.

What I found was simply divine. The broad noodles, spicy soup, and panang shrimp were everything we hoped for. It was expensive for Thailand, but not for us coming from London/New York about $28 total.

We had an early, 7 am pickup for our much-anticipated elephant day! 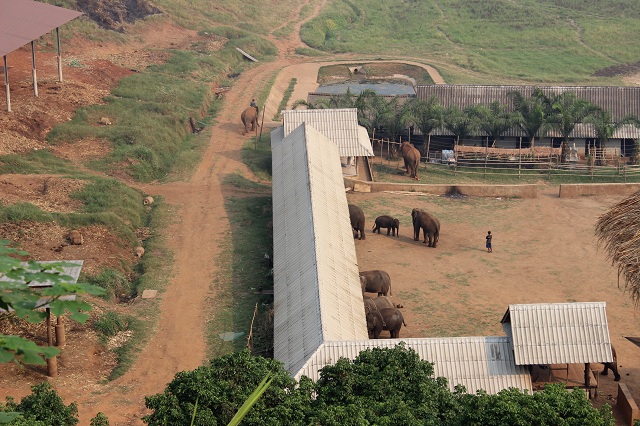 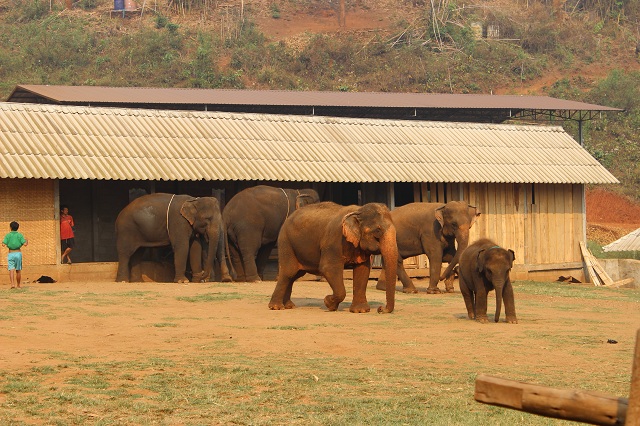 We got to the “preserve” and right away the elephants attacked us. Well, we were supposed to feed them these small bananas but it was a little scary because they came right up to us and started probing us with their disgusting snouts! There was one baby elephant that was particularly frisky. I seriously thought he was going to crush/stomp on us.

Interestingly our guide was a Swedish gentleman. Apparently he’d been working with elephants in his homeland before becoming smitten by a “Thai woman” and moving to Chiang Mai. 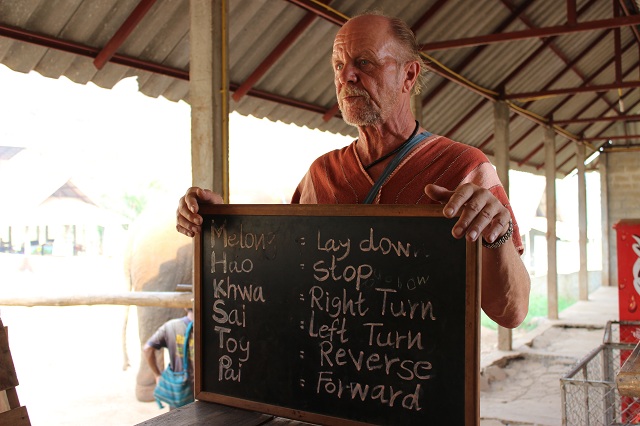 John and I were to ride the biggest elephant. It kneels down and we hop on, grab on to the ropes and when it stood up both John and I were really scared!

We were up high and riding a monstrous beast!

But in a couple minutes we were fine. All we did was scream at our animal, “Pai, pai, pai, pai….” They are dense and slow.

However, the ride was amazing – like nothing I’ve ever done before.

Inez and Chrissy got the oldest elephant. It was 55 years old! Yeah, it was VERY SLOW.

After we did a big loop we arrived at the water. We were supposed to get in there with them but out of the four of us, only Chrissy was brave enough. 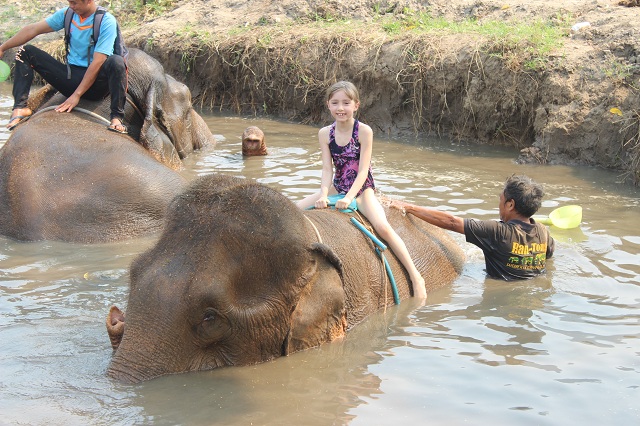 Okay time for a video which is better than me yapping about everything. The first couple minutes cover our Temple tour…

I was leery about the water to start with and then I saw the girls in front of me get doused with water AND mud from their elephants snout. So I jumped off.

There were many “elephant poops” in that water too. A woman was scooping them (or at least the ones that didn’t sink!) out with the biggest pooper-scooper you’d ever see!

We took at Tuk-Tuk ride later that night and dined at Whole Earth restaurant. It was good – not as good as the street-ish type food from the Night Bazaar, but a lovely place nonetheless. 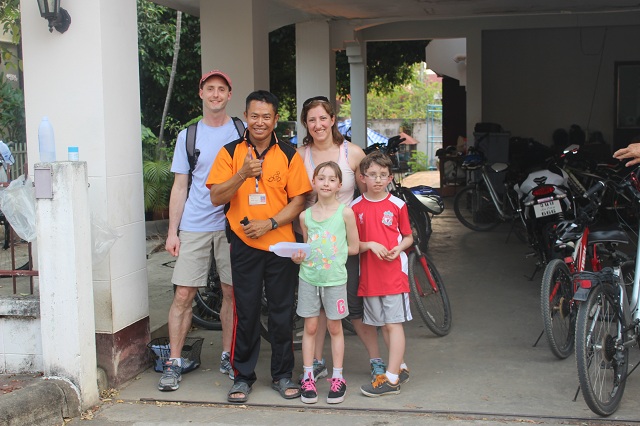 I should mention that we did have time each day at our hotel for the pool and the gym. Our last day, after much deliberation and trepidation, we decided to book the Colors of Chiang Mai bike tour.

Now would YOU want your kids riding bicycles through the streets of Thailand?

That’s what I mean about having some trepidation…

But the tour was allegedly pretty tame, in the quieter southern outskirts of town.

And it was terrific – worth all the TripAdvisor hype and then some!

We saw many things including: huge beehives, cashew trees, cotton trees(?), a leper community, a family bakery, rice paddies, some more temples, and we visited an orphanage.

You can see all that on my shaky video:

And in my GALLERY.

The lunch we had was the national Thai meal which is basically a drumstick on a bed of noodles.

What was interesting – and a reminder – was how our tour guide gathered up and bagged all the chicken and bones from our dishes. He said it was to feed the stray dogs in his neighborhood.

Thais are really poor and we think nothing of wasting food or over-eating. Whenever we had the opportunity, we lavished tips on waiters, guides, tuk tuk drivers, hotel staff, et al. These people really, REALLY appreciated anything we gave them.

On the bike tour we enjoyed some of those cakes at the bakery, paid for them of course, and I also tipped the hard-working family there. They gave me a bag of cakes which we brought to the orphanage.

Chrissy was extremely excited to visit an actual orphanage. After all she’s read so many stories about them…

This one was founded and run by Dutch Christians. Many of the kids were away during our visit but the ones we met were great. There’s footage of them singing in the YouTube video above (just skip past my shaky bike segment.)

Another $6 Tuk Tuk rid back to the hotel to cool off at the pool….Inez went out in search of a good Thai massage…

We ate delicious food and shopped at the Night Bazaar again that night, our last one in Chiang Mai before heading to the beach at Phuket.

Here’s one last link to the GALLERY.