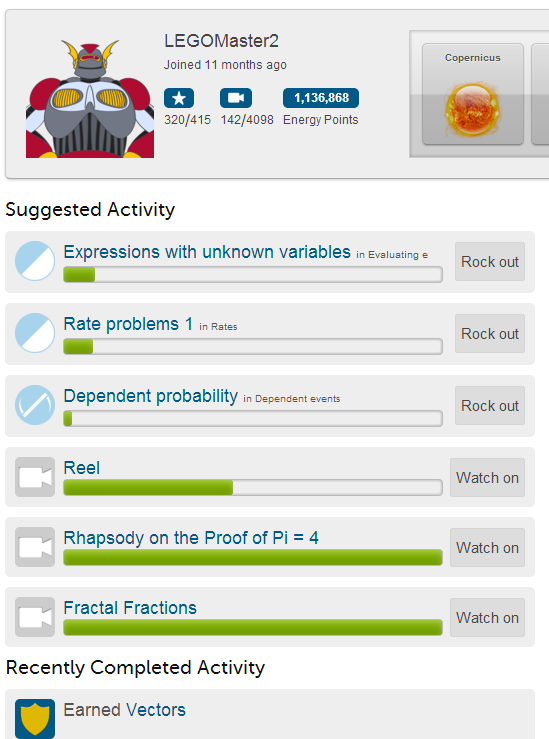 John is chugging along with Khan Academy. As you can see, now he’s completed 320 of the 415 *skills*. If one goes too slow with this, well, that’s not good in its own right, not an effective way to learn math, but also he or she will fall behind because Khan keeps adding skills! Two weeks ago….there were less than 400 skills on the practice module.

Another thing I’ve noticed is that Khan has gone, correctly, to *perpetual review*. So although a student masters a subject, questions from it keep popping up in the *review*. This is good. I’ve seen some teachers recently adopt this strategy, making all tests “cumulative”.

Khan continues to work out the kinks. They’ve added a calculator because some sections involving decimals simply could not be mastered without using one. (Although I’m quick enough to do these particular questions by hand!) It just wasn’t clear to the students and they struggled making progress.

My daughter is doing well with the math on IXL.com. Since we started on that, according to the usage statistics provided, she has apparently spent 28 hours and 42 minutes on it, solving 6,121 problems. Even though she can do and has done up through 6th grade level math, I let her start on the 2nd grade level of IXL. And I was glad to see that not only is IXL more difficult than the typical 2nd grade math curriculum, but also that it covers a few topics and concepts that we hadn’t hit yet. Overally, again, I would say that IXL is more than worth the $10 monthly fee. 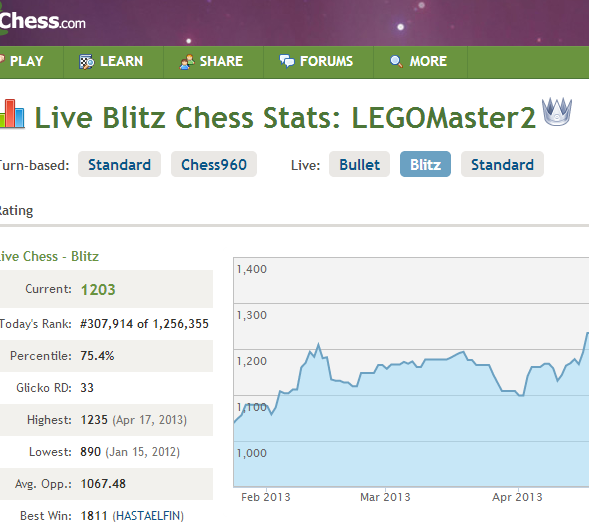 John continues to improve at chess. He still has his weekly private lesson (2100 rated coach) and he’s played in 3 tournaments since we got back from Florida in March. While he hasn’t had any notable results to speak of in these tournaments, his rating has jumped significantly on Chess.com – up to 1223 last week! (see graphic above)

In one of these recent tournaments he lost to kid who is younger than him. This is the first time that I can recall him losing to a younger player. The youngster was good – even though John should have won that game. Anyways I asked his mother if he was working with an instructor and she confirmed he was. He works with an instructor from India, over Skype, for the princely sum of $10 per hour!

I pay my instructor $50-$60 an hour and he’s good, very good. But I have to look into this online, outsourced option. The price is simply too compelling. The best I can find so far is advertised at $15 per hour.

Finally I was able to find a decent chess workbook which we’ve purchased and incorporated – The Chess Tactics Workbook: Expanded 4th Edition. Make sure you get the 4th edition. It’s pretty good.

Also, I’m happy to report that my daughter (age 6.85) not only played in her first two tournaments but won and drew a few games. What I’m more excited about, however, his her unexpected enthusiasm to compete. We have to miss the next big Long Island tournament on May 11th for an out-of-state baptism and she won’t stop complaining about not being able to play. Fortunately we are in the NYC area and there are plenty (weekly!) of opportunities to compete…