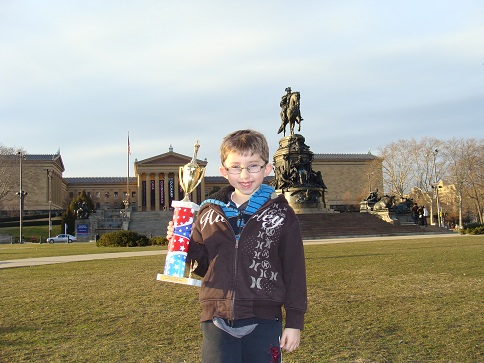 In the wake of his First Chess Championship….it was time to step up a weight class.

This past weekend John and I drove to Philadelphia to compete at a larger venue.

Whereas the tournament John won this past fall featured kids, his own age, with chess *ratings* below 600….this one had no age restrictions and allowed players with US Chess Federation ratings up to 900. So John played against teenagers, adults, and generally speaking kids that had a lot more tournament experience. In fact, it’s easy to punch in anyone’s name on the US Chess website and see exactly what constitutes their rating and tournament playing experience. (One of his opponents had competed in an impressive 7 TOURNAMENTS in November and December alone!)

Well as you can see above, not too bad. He came in 5th place out of 63 competitors – winning 5 of his 7 matches. Of course he was positively beaming afterwards!

Now this is a major chess tournament. Grandmasters were competing in the *open section* in 5 hour games. So we got an eye-opening glimpse of what chess looks like on the highest level.

Here is John’s last game in the tournament. He made a nice *combination* at the end for a rather quick checkmate. His opponent was a teenage girl who sneaked into this Under-900 rating even though she was rated 931! (John was rated 672 at the start of the event.)

Just click the arrow to see the moves. John played black pieces in this one.

So we’ll continue to push chess 20 minutes per day….and continue to spend one hour with our chess coach each week and see where this takes us. We have no delusions whatsoever that our son will become a world renowned chess champion or anything – nor do we necessarily want such a grueling life for him.

We just want him to continue to learn how to push the limits of his brain and for him to experience the exhilarating benefits of hard work and persistence.