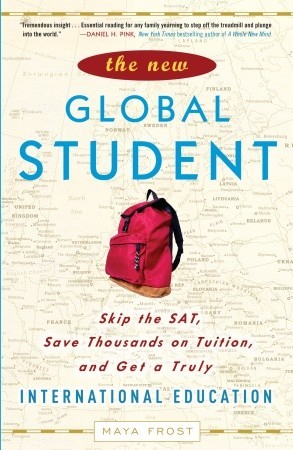 Maya Frost in the The New Global Student wants you to…

Ship your 15 year old off to a Third World country for an entire year!

I know, it sounds crazy.

She and her husband essentially did this. They left a comfortable life here in America and moved to several foreign locales. Their girls were teenagers at the time and they each splintered off even further – to live on their own in other countries.

Why would or why should any parent do this? Isn’t it risky? Isn’t it expensive? Dangerous?

Of course she thoroughly addresses those questions in the book. In short her arguments are that yes it’s safe, it’s actually cheaper, and it should be done for the sheer transformative, educational power inherent in living abroad – for the growth that comes via immersion in a completely foreign and uncomfortable environment.

Like anyone else tossing a new idea around in their head I was keenly interested in her personal “results”.

Quite frankly I didn’t find them that impressive. Her girls definitely grew up fast. They were clearly light-years ahead of typical teenagers today in terms of maturity.

(Her oldest daughter was teaching sex-ed to prisoners at the ripe old age of 18. At a minimum I think this is wholly inappropriate. Furthermore, I don’t think it’s anything a parent can or should boast of…)

Also, Maya Frost talked a lot about “college” – community college at that. And when her girls went abroad they were enrolled in government (public) high schools.

Since I have ZERO interest in sending my kids to age-graded institutions of “learning” here in America, I can’t imagine why I’d want to do so in a foreign country.

It was a hard book for me to read. Again, I wasn’t wowed by her results. And while certainly admirable outside-the-box thinkers, Maya and her husband don’t espouse parent-led, individualized education. In fact I’m quite sure they don’t know anything about it.

The idea that a parent MUST ship their young teenager, their child(!), off to Vietnam or Egypt in order for them to reach their full potential is implicitly offensive.

It’s an offensive assertion for the same reason parents keeping their kids out of schools is offensive – because it implies self-righteousness and yes it implies to school parents that they are negligent.

The idea of children living abroad on their own also militates against one of the primary reasons 3 million kids are educated by their parents in America – so that we may forge tighter family bonds.

Our oldest, John, is just about 9 years old. My wife and I love him to death. We couldn’t imagine shipping him off in only 5 or 6 years.

Maya is tough too. She would ban ALL communication for the first 30 days. I think she bans visits as well!

Throughout the book, as her arguments ramped up, I became increasingly uncomfortable with and truly saddened by the logical ramifications. If she was indeed right, we would have to strongly consider shipping our babies off, soon. After all, our life choices already revolve around “what’s best for the kids” – no matter how unpopular or self-sacrificial.

I starting reflecting upon my own life and came to the realization that much of who I am today is a direct function of having “branched out” from my birthplace in Massachusetts. Going to Philadelphia at age 18, staying for 9 years, and spending a lot of time in NYC before moving there definitely broadened my horizons. I can’t even fathom what I’d be like if I had never left the comfort and familiarity of New England.

So if merely going south a few states and a few hundred miles transformed me….then it certainly follows that youngsters do indeed HAVE TO go abroad, they HAVE TO go out and experience the world in order to maximize their personal growth.

My wife emailed me the other day and asked if she should volunteer for an opening at her firm in London. It’d be a 12 month gig.

I told her “probably” – even though after living in six different places in the past 12 years and finally, FINALLY gaining some comfort and momentum here on Long Island, NY it’d be very tough to “uproot” again.

She threw her name in….and it seems the job can be hers if she wants it. BUT now they are saying “18 months”. Argh!

For a single year, I’m all in. Twelve months goes by fast. But 18 months can turn into 2 years, easily.

So we are thinking hard about this potential move now. (It wouldn’t be until February.)

Note there’d probably be no “thinking” at all if I hadn’t come across – The New Global Student.