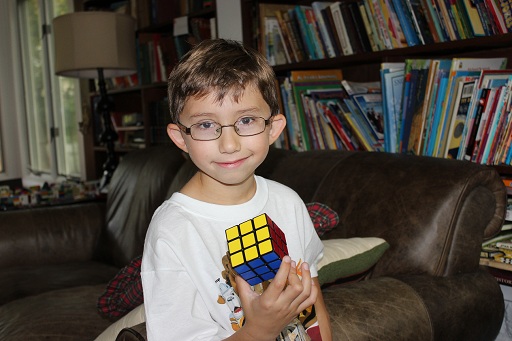 A few weeks ago my son solved the Rubik’s Cube!

No, he certainly didn’t figure it all on his own. He followed the instructions on their website.

Nonetheless, it still took several hours, some sweat, and certainly some tears. I would say it took him one 4 hour session – which was interrupted several times by frustration wailing – and then another 2 hours the next morning. John ran outside in his bare feet (a big “no-no”!), interrupted my conversation with a gutter guy, and announced he had finally solved it. He was positively beaming.

Kids usually back off, break down, and quit in the face of failure. This is bad. Those who don’t are the ones who will advance in life. Every time my kids get frustrated, my response is “shut up, shake it off, read it again, try it again,…”, etc. They really need to learn about and harness the power of persistence.

Far too many parents, especially mothers, submit to the whining and the excuses.

As far as I’m concerned, when you come across something that seems impossible or insurmountable….then THAT is precisely where you ought to focus your energy.

We took that picture; he showed his mother at night; and then I mixed the cube back up.

For the next couple of days part of his daily “work” was to re-solve the cube with me mixing it up upon completion each time.

He is getting faster, but still hasn’t memorized the algorithms yet.

The frustration comes from being nearly solved and in trying to just move one square to a certain location….you end up screwing up a whole bunch of other squares you just spent a ton of time lining up.

After his first 4 hour stab at solving it, as I was tucking him in, John moaned that he would “NEVER” solve it.

I laughed and reminded him that at one point, not long ago, he couldn’t remember that 3+4 was 7. The cocky kid laughed and didn’t believe me for a second.

Oh yeah, in keeping with this determination theme I’d like to point out that John is also working diligently on an “impossible” piano piece – Star Wars Main Theme. (Click the link!)

At first he couldn’t even read the sheet music. But we encouraged him to just keep at it, over and over again. I’ll post him playing that, soon.

I really believe it’s important not just for kids, but also for adults, to be continually striving for goals, to be chasing perfection in one form or another.