My son is 9.8 years old and it’s time he started working and earning his own money.

I had a notion that he should “busk” – which is perform music on the street for tips. There’s no doubt in my mind that he would make a ton of money playing the keyboard here in London on street corners and in Tube (subway) stations. When he plays publicly at airport, hotel, and restaurant pianos he usually garners a sizable crowd and much applause.

I even went down to a music store and spent over $500 buying an amp to make it happen.

But there’s apparently a law against kids under the age of 14 busking in the UK. Sure I could flout the law and take my chances but just wasn’t up to the fight. Plus the big season for doing it (i.e. the summer) is really over. (I returned the amp…)

It might not seem like it, but that kid probably made a lot of money that day. Coins in Europe, unlike American coins, actually can be very valuable.

Right after I found this video (from Googling “kids busking”)….we found the sheet music for that great song and John started working on it. (River Flows in You by Yiruma)

So how could I put him to work? How could I get him to feel the rush of monetary compensation???

Well a few months ago I actually started the process of making him my tech assistant.

When I bought this domain (HomeschoolDad.com) he begged me for one of his own.

Understand that both he and his sister have been blogging for a few years now on the Blogger.com platform – which is pretty easy to use and serves our needs.

But apparently that wasn’t enough.  John wanted his own website, off the Blogger platform. He was begging to “code in HTML”.  I must have told him “no” a hundred times before I gave in and bought him HomeschoolSon.com for $12.  I mean I was struggling enough with the WordPress platform myself!

After getting him the domain, I told him he was on his own, that he would have to learn and figure out everything for himself – that I didn’t have time to help. “Okay”, he promised.

However, I did get painfully sucked in. His website kept crashing and was bitten by bug after bug. I was livid because I had predicted this from the get-go. After all WordPress is very penal compared to Blogger. One little line of incorrect code kills the entire website!

You see my son is very OVER-CONFIDENT. Yes he’s really smart, but he’s still an immature young buck and he’ll merely read about something or try it once and genuinely believe that he’s instantly an expert.

He’d run into an issue with his website; I would tell him exactly what to Google looking for a solution; and then no less than 10 seconds later he’d swear that he figured it all out no matter how complicated the problem. Of course he didn’t actually fix it and I’d become enraged. Like I said, he’s extremely over-confident. My wife and I have never seen anything like it and it’s really his Achilles heel in many areas.

Yeah, with chess, while his opponents will spent upwards of 10 minutes contemplating a single move….he moves almost instantly!

He reads precisely twice as fast as me too (I’ve timed it).

Argh, if only we could get him to clean his room at this lightning speed.

John kept asking for the Avada Theme for his website – the same theme I purchased for myself.

The answer was a stern “no” but the question kept coming.

I just didn’t feel like shelling out another $60 for his latest idea of the moment.

But I thought long and hard about it and ultimately decided to get him the Avada Theme too. My reasoning went like this – if I’m going to have to troubleshoot both his website and mine….they may as well at least be the same!

And despite my prescient reluctance and despite the rough start, I knew that eventually John would get rolling – that he’d actually learn from his mistakes just like everyone else (who is smart).

It didn’t take too long either. I made him sit on his butt and pore through the help forums, demo content, and tutorials. Now he’s actually been teaching me with a few things here and there.

I’ve pretty much made not only blogging, but improving his blog part of his *weekly assignments*.

Recently I bought some software to make my own quizzes and tests for my math students. I had already written a Hard SAT Math book (for students stuck at 700 on the Math section) and I needed it to be inputted onto this new platform.

Normally I would either do it myself or pay someone in the Philippines $2.20 per hour to do so. Overall it might cost about $40 to get done.

But I decided to have my son do it for me, and I decided I would pay him 20 pounds ($34). I was going to pay for it anyway, right? I may as well use the money as not only an incentive for a kid who is not legally allowed to work, but also as an investment in a potential future employee.

Well, in addition to working on it during the daytime (“school hours”) he stayed up very late, many nights working on it. I drove him pretty hard and he was up to the task.

When he was done, he had learned a whole lot about the software I just spent $480 on – saving me a lot of personal ‘trial and error’ time.

AND his sister Christine was begging me throughout for a chance to make some online tests too. So when John was done I accommodated her. She’s making me left-to-right multiplication quizzes, for starters. (Yes, she’s in line to be paid a fair wage as well.) 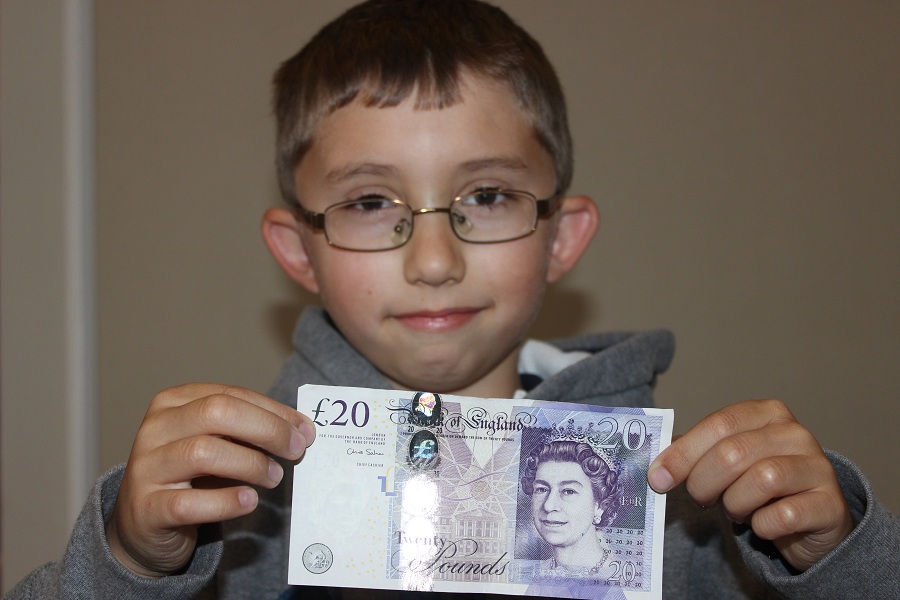 I’ve always seen a “family business” as the ideal way to make a living. We’re not there by any stretch, but we’ve at least taken a small step in that direction so I’m pleased.

The important thing is to introduce young children to the idea of working for money.

Of course John squandered his money before he even received it.

And if he’s anything like his father, or most other Earthlings, he’s going to have to alternately earn and squander a lot of money, many times before he graduates to a sophisticated understanding of economics and personal finance.

All I can hope to do is to accelerate the process!

UPDATE – Here’s John playing that same song as the kid above: