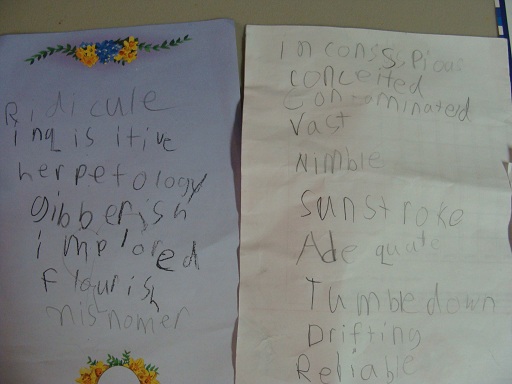 When I read books, I use a piece of paper for my bookmark. On it I take notes and have for some time now, perhaps dating back to high school….I also write down every word that I don’t know. (I only read non-fiction!)

And when I finish the book, I type up my notes on a Google Doc and I enter all the words into a different *Vocab* Doc along with their newly learned/re-learned definitions.

A month ago I decided that my son was ready to do the same. But since he reads mostly fiction I only require him to write down unfamiliar words on his out-sized bookmark.

He too has to catalog these new words on a Google Doc. I only make him look up about 25% of them in a dictionary (the ones I’m not sure of!). The others I verbally define for him, succinctly in a word or two.

There was some initial resistance to this from him and more so from my wife who thought that it would *ruin* his reading enjoyment.

But of course my perspicacity soon became manifest…

John has really dived into this new exercise with enthusiasm. Since he reads so much (200+ pages a day!) he’s constantly peppering me with *what does ______ mean?*

Some of today’s words were: karma, endeavor, psycho-neurotically, tome, and daunted.

A friend ribbed me this morning about having my 7.17 year old start studying for the SAT. Indeed they are partially right and they made that accusation without even knowing about our *vocab bookmark* policy. They had just overheard me discussing iPad flashcard apps with someone who has a teenager who just got 800 on the verbal PSAT.

Of course my son isn’t *studying for the SAT*….he’s simply learning new words to expand his mind.

I’ve heard many people assert that they can learn words without looking them up – that they can infer definitions from context alone.

But I’ve never believed that for a second. At a minimum, the student who diligently looks up new words will learn them more efficiently AND with greater precision.