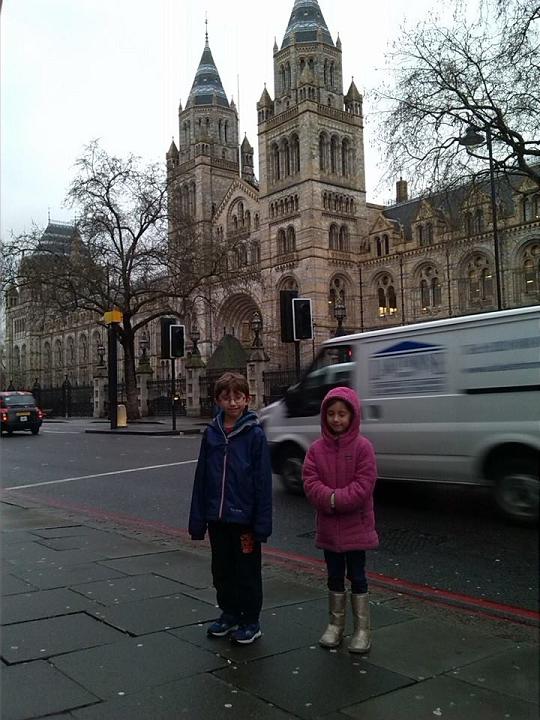 Last Friday we arrived early in the morning, local time. It was quite a struggle to “ring” the real estate agent….and get her to meet us at our new apartment. My wife’s Blackberry wasn’t functioning (or was it, but we just didn’t know how to dial UK numbers?) and it seems we were given the wrong number to call!

Anyways, we did get in and the kids were super excited to see the bunk beds we chose (from the furniture rental company) and the rest of the snazzy apartment we rented. I estimate that it would cost over $2.5 million to buy, if not $3 million, in US terms. London real estate is apparently up 85% over the past 5 years.

We spent Friday decompressing and unpacking the 11 bags we took on the plane. The flight itself was exciting for the kids as John only remembered a single past plane ride and Christine was too little to remember that she once flew to Detroit about 5 years ago. We flew “business class” so my spoiled kids are starting out with a completely warped sense of flying!

Most of our stuff was shipped via air freight and was not to be expected for 2-3 weeks – on account of UK Customs and other bureaucratic nonsense.

I did have my 6-year old, still-functioning fine $600 Sony laptop and I found public WiFi that I promptly bought for the princely sum of $40 for 5 days access. We spent the afternoon trying to figure out how to order a grocery delivery (no small feat!) for the next day.

Then my wife Inez took them out to the Science Museum which is just around the corner! Both kids loved it. Inez said it was good – almost as good as the Boston Science Museum but much, much cheaper. The one is London is free whereas Boston’s costs $63 for a parent and two urchins. 63 bucks is no big deal if you go once every year or two….but we’ve been 3 times already in one week!

On Saturday my wife took the kids to Holland Park where they had a blast. They also hit the South Kensington Library and got cards. Sadly, the libraries here limit book borrowing to something like 12 books! (We always have over 100 books as a family checked out back in New York.)

Sunday we went to church and took our first “Tube” ride (subway) towards the center of town. We hit a famous department store – Marks and Spencer. The prices there were positively obscene. Nonetheless my wife bought some wastebaskets, kitchen stuff like a spatula and can opener, and a hair dryer. We lugged it all a good 4 miles home – with the kids whining off-and-on.

It has been very hard to get around thus far. For one thing, the streets are all windy (i.e. not parallel and perpendicular). Secondly, they don’t believe in street signs here in London! Thirdly, only after several days were we able to get SmartPhones with GPS. And believe me, Google Maps is completely WRONG in London, a lot.

I am really looking forward to the extra walking (we don’t and won’t have a car all year) for my kids. I feel like they don’t get enough physical activity normally so this will be good for them. BUT they do have those short chicken legs/strides….and they are always wearing oafy rainboots here.

Yeah the weather is dour. But we are coming from a dour Northeast winter so it’s no big deal – not now anyway. Actually it’s warmer over here. Almost every day is in the upper 40s. It’s just that there is a lot of rain and wind. The rain is not of the “downpour” variety, but it’s incessant. Umbrellas are constant baggage/companions. Though many people seem to opt for hoods and just getting wet. I’m probably going to trend in that direction myself.

On Monday Inez went to her first day of work in the financial district, near St. Paul’s Cathedral. We did some math, chess, and reading while waiting for a plumber. Our landlord referred to him as a “heating engineer”. After he left….we hit the Science Museum for my first glance at it, and the kids’ second.

Tuesday we ventured north a bit to a Homeschool Park Meet-up. There we were warmly introduced to many other “Home Edders” as they call them. Collectively they seem very much like the families we meet in similar New York circles. The park was terrific – though we nearly froze to death! It is/was still January after all. And while it is nominally warmer, we are spending a whole lot more time outside than we would normally.

On Wednesday I found a “piano rental” room that was quite reasonable – “9 pounds per hour” or about $14.79. Our keyboard is still in transit so….we took a double-decker bus a few miles to the piano place. While the kids were very excited to ride on the top deck it was so foggy and rainy one couldn’t even see out the window! After they practiced we took the Tube to the library to replenish our reading material and so that I could get myself a card.

Thursday it was time for me to figure out and get a cell phone. I had spent nearly all week researching it! I got a Huawei Y300 Ascend for $130. It was a no-contract, pay-as-you-go phone that will only hit me for much less than half of what I paid in New York on a monthly basis. Thus far, cell phones are the ONLY thing we found here that is cheaper than NYC-area. I read that “chocolate and beer” were also cheaper, but that’s about it.

I would say that in general, food is 65% more expensive in London than in New York.

After I got a phone, I wasted 1.5 hours trying to find the Post Office (“Royal Mail”) to retrieve a package (“a parcel”?) that the mailman wouldn’t deliver. It was the router for my forthcoming internet connection. Then we spent the afternoon cruising around the Museum of Natural History (pic above).

On Friday we did our work at home in the morning as we always do before heading out to St. Paul’s Cathedral. Only we never made it there. We got lost, espied the Museum of London while we were huddled in a lunch place….and decided to take a look.

It too was free (donation only) and, in my personal opinion, much more interesting than the Museum of Science and the Museum of Natural History. The kids and I spent about 3 fun hours there before closing time and somehow figuring out our way home in the cold, nasty rain. (Note: rush hour on the Tube is nothing like rush hour on the NYC subway – it’s a whole lot quieter and not necessarily something we have to plan “around” as we do in NYC.)

It was a long week – even more so for Inez who had brutal drinks/dinner obligations all week long after work.

Of course there’s a lot more going on than in this summary. We’ve learned lessons on how to change money; how to translate English English to American English; how to survive crossing the street; how to manage European appliances; etc.

On Monday we will be finally be getting an internet connection, some more furniture, and the stuff we shipped over: computers, books, golf clubs(!), clothes,…

Stateside visitors are already booking weekends with us. And we are already planning trips to Amsterdam, Paris, Dublin, and likely Krakow.

And I will probably do a video/audio update next….there’s just so much to say!