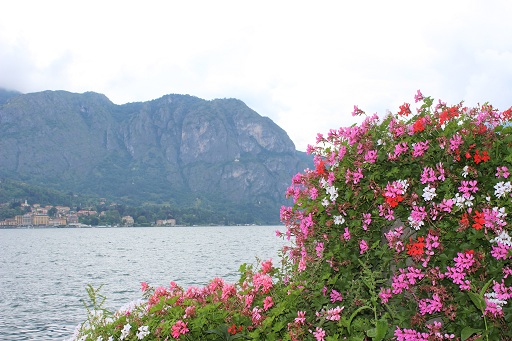 Ah….but we did manage to squeeze this trip in!

Last Saturday we flew an el cheapo airline (“EasyJet”) from London to Milan. From there we took a car (150 euros) up to Bellagio on Lake Como – which is right smack in the middle of the lake.

We enjoyed a preview of the mountainous beauty on the flight there over the Alps. Now I’m not the most traveled person on Earth by any stretch but I have to say that Lake Como has to be one of, if not THE, most beautiful place I’ve ever been.

Check out the pics and video footage:

We stayed at the Hotel Du Lac in Bellagio (280 euros/night). The town we visited via ferry boat was Varenna. The castle we hiked to there was Castello Vezio.

With more time to spare, instead of another pricey cab, we took take that ratty-looking train back to Milan and it only cost maybe 20 euros total. And actually the inside of the train was spacious and modernized.

We had an okay time there over our two full days at the Star Echo Hotel. But I would say that in general Milan is nothing special and hardly worth a trip to over all the other scenic places in Italy. It doesn’t seem like there is much to do there and coming from London and Lake Como….Milan felt a little dirty and rundown.

Inez had to work in Milan for a couple days so I took the kids out and about.

The Duomo (3rd largest cathedral in Europe) of course is spectacular. I think the highlight of the city was, however, Luini’s Panzerotti which was right next to the Duomo.

From there we walked over to the Castello Sforza which was okay. It was filled with art although my kids and I have had our fill of art these days. John and Chrissy very much enjoyed riding the trolley and the Metro (subway) in Milan. We did hit a park and they got gelato more times than could be counted so they made out alright. Of course there’s a limited extent to which any children can appreciate trips like this. No matter what, they’ll grow up thinking it’s normal for kids to travel the world!

The food in both Lake Como and Milan was very good. Lots of fresh pasta, pizza (inferior to New York’s!), and risotto (superior to everywhere!) were consumed.

Now my first three stops in Italy were Rome and the Amalfie Coast (2001), and then Lake Como so I was somewhat shocked at the relative squalor of Milan. I guess in my mind, being a fashion capital and an historic banking center(?) I assumed it would have been more prosperous looking. It definitely has its nicer sections but overall it was a reminder that Italy has really become a Second World nation.

Ironically we were in Lake Como for the Italy versus England World Cup match this past week. However, it didn’t start until midnight and there was NO WAY any of us were willing or able to stay up for that! I did hear some light cheering outside while I was sleeping. Certainly it would have been a more interesting experience had we been in urban Milan on game night.

Our time here in London is flying by. It’s been 5 full months now!

Another heavy dose of Italy is coming up soon. We are excited to leave for our BIG trip, 9 days, to Sicily next week.